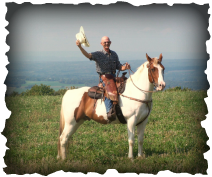 Born 1959 in Western Germany, raised in Eastern Germany due to my parents divorce, I’ve always been fascinated by the beautiful, majestic appearance of horses, the looks of   horse with rider just thrilled me.
But my mother never allowed me to get even close to them, she was simply afraid I could get hurt by working with them, that’s why my only contact to horses as a child was gathering the horse droppings in our street for her roses…
I had to become 18years old to start my first job in the equine industry; I became a stable hand at a breeding and training facility in East Berlin.

In 2000 I left Germany and moved to the USA where I completely switched to the Western Riding style, it became more attractive to me because of a broader variety of competitions (and a more comfortable saddle too…).

Then, in 2001, I became the great opportunity to realize a childhood dream, with the help of friends in Mexico I organized and undertook a long distance trail ride, the Baja California southwards for 800 miles (about1300km) with just one horse and totally by myself. This ride actually became one of the highlights of my life; I got to experience close up what the first pioneers had to endure a few hundred years ago to explore the West of Northern America. This ride and later my work at different Endurance stables actually ignited my passion for Endurance Riding.
I’ve spent up to 10 hours a day in the saddle, and solved the entire distance in 26 riding days, with some days of rest of course for me and the horse, record has been one day with 79km (about 47 miles) because of the lack of water between two resting stops, the total weight including me, the saddle and equipment the horse had to carry has been just about 250lbs.